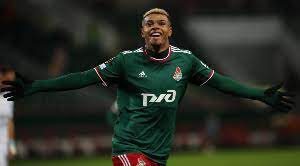 Faustino Anjorin has described scoring his first professional goal as ‘an unforgettable night’ after he helped Lokomotiv Moscow salvage a draw in their Europa League encounter against Marseille on Thursday evening.

The Chelsea loanee made his debut for the Railwaymen last week in a league game versus KS Samara, playing the last seven minutes of a 2-0 win, before he was given more minutes off the bench against Marseille.
A minute from time, the England youth international of Nigerian descent introduced himself on the European stage as he restored parity for Lokomotiv Moscow with a beautiful strike.

With the impact he made against Marseille, it’s only a matter of time before Anjorin is handed his full debut by Lokomotiv Moscow manager Marko Nikolić.

The 19-year-old attacking midfielder is on loan at the Muscovites until the end of the 2021-2022 season and the deal comes with an option to buy.