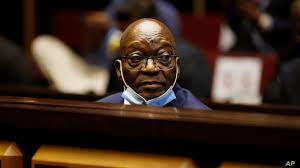 “The Constitutional Court can do nothing but conclude that Mr Zuma is guilty of the crime of contempt of court,” judge Sisi Khampepe said.

Zuma, 79, is accused of enabling the plunder of state coffers during his nearly nine-year stay in office.

“This kind of recalcitrance and defiance is unlawful and will be punished,” Khampepe said.

“I am left with no option but to commit Mr Zuma to imprisonment, with the hope that doing so sends an unequivocal message… the rule of law and the administration of justice prevails.”

“The majority judgement orders an unsuspended sentence of imprisonment for a period (of 15 months),” she declared, ordering Zuma to hand himself over within five days. The commission of inquiry is headed by Deputy Chief Justice Raymond Zondo