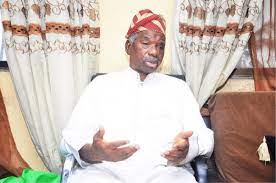 Lagos State Governor, Mr. Babajide Sanwo-Olu, has congratulated Prince Tajudeen Oluyole Olusi, the Leader of the Governance Advisory Council (GAC), the apex leadership of the All Progressives Congress (APC) in Lagos, on his 86 years birthday.

Governor Sanwo-Olu in a statement issued by his Chief Press Secretary, Mr. Gboyega Akosile, on Thursday described Prince Olusi, as a visionary and respected leader, who has contributed immensely to the development and growth of Lagos State and Nigeria in all spheres of life.

He also hailed the former National Vice Chairman (South-West) of the Action Congress (AC) and son of the late King Sanusi Olusi, former Oba of Lagos, for his commitment, exemplary leadership and continued contributions to the development of Lagos State and the ruling party at the state, zonal and national levels.
Sanwo-Olu also commended Prince Olusi for his commitment to public service, party politics and good governance, describing the GAC leader as epitome of honesty, dedication and service, who has used his leadership positions to improve the lives of the people in his spheres of influence.

The Governor said the elder statesman remains one of the few Lagosians and Nigerian leaders worth celebrating for his life of consistent commitment to public service and politics.

He said: “On behalf of my adorable wife, Ibijoke, the good people and government of Lagos State and entire members of our party, the All Progressives Congress (APC), I rejoice with our father and eminent leader, Prince Tajudeen Oluyole Olusi, on his 86th birthday.

“Prince Tajudeen Olusi is a true democrat and one of the trusted members of the progressive camp, who has been playing active roles in party politics and governance in Nigeria for several decades. He is one of the firm believers and disciples of the late sage, Chief Obafemi Awolowo and has always remained consistent as a progressive in promoting good governance and democracy.

“He is one of the respected leaders of our party who have contributed immensely to the development and growth of Lagos State and politics for over six decades as a member of the progressive camp not only in our dear Lagos State but South-West and entire Nigeria.

“As Prince Tajudeen Olusi celebrates his 86th birthday, I pray that God will continue to bless him with more years of joy and good health for him to render more service to our dear party, humanity and Lagos State.”