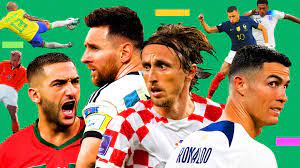 Eight teams remain in the 2022 World Cup, all with the same dream of lifting the trophy on 18 December.

After a tournament of shocks in the group stage, we are now progressing to the real business end, and the quarter-finals are stacked with talent.

Six of the teams left in are former champions or finalists – and they have won the competition 10 times between them.

There’s a surprise package too, with Morocco now aiming to become the first semi-finalists from Africa having reached their first quarter-final.

BBC Sport looks at some of the themes brewing as players aim to underpin their greatness and go down in footballing folklore.
Friday: Croatia v Brazil (15:00 GMT), Netherlands v Argentina (19:00).

Shock group-stage exits for the likes of Germany and Belgium – and Spain’s elimination in the last 16 – means they have missed out on being part of a quarter-final line-up for the ages.

The four ties are so closely matched you just can’t call them. It is going to be epic.
England and France – the reigning champions – meet at a major tournament for the first time in 10 years, and for the first time ever in the knockout stages.

Bryan Robson scored twice in a 3-1 England victory over a side captained by France great Michel Platini.

The Three Lions didn’t go on to become world champions in Spain that year, but the only time they did – back in 1966 – one of the teams they beat on their way to glory was, you’ve guessed it, France. Not a bad omen.
However, now they have the daunting prospect of facing in-form striking sensation Mbappe, who leads the Golden Boot race with five goals and plays alongside his country’s all-time top goalscorer in Olivier Giroud.

“Saturday will be really difficult,” said England captain Kane. “France are a great team, reigning world champions, so we know it is going to be a really tough evening.

“I think if you are going to win the World Cup, you have to play the best sides in the world, and France are certainly up there.”
Sunday, 18 December. A showdown at Doha’s Lusail Stadium. The two greatest players of their generation going head to head – their last shot at World Cup glory. It’s on!

Argentina’s Messi and Portugal’s Ronaldo have pushed each other to rewrite the record books for years. At this tournament alone, Messi scored on his 1,000th career appearance in the last-16 win over Australia, while Ronaldo became the first man to score at five World Cups.

Both have won their continental titles – Messi claimed the Copa America last year and Ronaldo the European Championship in 2016 – but the biggest prize in football remains elusive.

With 35-year-old Messi hinting this may well be his last World Cup and Ronaldo turning 41 by the time the next tournament comes around, this is surely their final hope of lifting the famous gold trophy.

However, Ronaldo had to settle for a bit-part role in Portugal’s last-16 tie – relegated to the substitutes’ bench as his 21-year-old replacement, Goncalo Ramos, smashed in a hat-trick against Switzerland.

A final involving the two superstars would leave neutrals salivating. Will the ‘GOAT’ debate finally be settled?
Before that, a mouth-watering semi-final could be on the cards.

Should both progress past Croatia and the Netherlands respectively, a heavyweight South American battle will ensue between Brazil and Argentina at Lusail Stadium.

Five-time champions and tournament favourites Brazil showcased their credentials by coasting past South Korea, while Argentina needed the brilliance of their skipper Messi to edge them past Australia.

The teams have met four times at the World Cup, though not since 1990, when Claudio Caniggia’s late winner took Argentina through to the quarter-finals.

Hopes of wrestling the trophy away from Europe lie heavily with these two sides, with Brazil the last non-European team to win the competition back in 2002.

Star man Neymar recovered from an injury picked up in their opening game to score in the last-16 victory over South Korea and now needs just one more goal to match the great Pele’s 77 strikes for the Selecao.

But Luka Modric’s Croatia and Virgil van Dijk’s Netherlands will have a big say on whether that huge spectacle comes to fruition or not.
Talking of the Netherlands, Louis van Gaal’s side and Argentina are familiar foes in this tournament, set to meet for the sixth time for a place in the semi-finals.

It’s a repeat of the 1978 final, which the South American side won, and their most recent meeting was in the last four eight years ago, with Argentina victorious on penalties.

But one of the most famous moments – not only in this fixture but in World Cup history – came in 1998 when Dennis Bergkamp scored a sensational last-minute goal to take the Netherlands through to the semi-finals.

Cody Gakpo to do something similar this time…?

Achraf Hakimi’s winning penalty in the shootout victory over Spain was majestic, dinked down the middle of the goal to spark wild celebrations at Education City.

Their progression to the quarter-finals of the World Cup was given a royal seal of approval too, as boss Walid Regragui received a phonecall from Morocco’s King Mohammed VI after the game.

Well organised and difficult to beat, Morocco are bang in form – they are yet to lose at this World Cup and have conceded only one goal in their past seven games.

Morocco are just the fourth African nation to reach the last eight and are looking to become the first side from the continent to make it through to the semi-finals.

However, another stern test against European opposition awaits – and Portugal are aiming to make history of their own by reaching a first final.