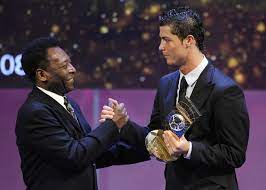 Portugal superstar and five-time Balon D’or winner, Cristiano Ronaldo, has paid tribute to the Brazilian football legend, Pele, who died on Thursday night at the age of 82.

Pele is widely regarded as one of the greatest footballers to have ever played the game, regularly mentioned alongside Diego Maradona and, more recently, Lionel Messi and Cristiano Ronaldo.

He remains the only player to ever win three World Cup titles following his successes with Brazil in 1958, 1962 and 1970.

Reacting to the death on his verified social media handles, Ronaldo said, “My deep condolences to all of Brazil, and in particular to the family of Edson Arantes do Nascimento.
“A mere ‘goodbye’ to the eternal King Pelé will never be enough to express the pain that the entire football world is currently embracing.
“An inspiration to so many millions, a reference yesterday, today and forever.”